'The Burning Sensation' SMG was a premade Submachine Gun created by FourthDawn (z3roarmada) for Blacklight: Retribution.

This weapon was one of the player-made weapons that was implemented into the game after a contest. Originally it was unlocked at Level 1 and was also one of the first weapons available to have incendiary ammo which could allow new players to experience and try it out before working towards Level 30 where they can finally unlock this type of Ammunition for themselves.

After the Parity Patch was released premades could no longer be purchased. See Premades for more information. 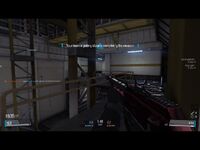 'The Burning Sensation' SMG in-game
Add a photo to this gallery
Retrieved from "https://blacklight.fandom.com/wiki/%27The_Burning_Sensation%27_SMG?oldid=18600"
Community content is available under CC-BY-SA unless otherwise noted.