The AK470 Rifle Rifle is a Primary Receiver released as part of patch 1.100 for Blacklight: Retribution.

The AK470 Rifle is a fully automatic weapon with moderate damage, average firerate and average spread but higher recoil. This weapon has a higher damage range and recoil when compared to the Assault Rifle and this becomes evident when customizing the weapon and when used in-game.

The AK470 Rifle is best utilized at medium range where it's low ADS Spread and higher damage can be used effectively. When used at long range, firing in quick bursts can counteract the high recoil.

Mid range is where the AK470 Rifle really stands out. Using a scope with a quick Scope In speed will further players' ability to win these fights.

The AK470 Rifle is often out-classed at long range by more accurate weapons such as the Bolt-Action Rifle, Heavy Assault Rifle, or even the Combat Rifle. Some strategies to use on long range fights are to take cover and fire in short bursts, or advance and close the distance until you have the range advantage.

Additionally, the increased Hip and Move Spread can make the weapon difficult to use at close range or in CQC fights. An effective way to build the AK470 Rifle for short and medium ranges is high damage, high accuracy, and maximum recoil. The high recoil can lead to headshots when the rifle is aimed at the chest, which combined with high damage, can make short work of heavy-armored players.

Even though this weapon is statistically similar to the AR, it is not recommended for new players because of its high recoil. Players can still be proficient when using this weapon as long as they understand it's strengths and weaknesses.

There are 5 different magazine types available for the AK470 Rifle. For an more information see AK470 Rifle Mags.

These premade versions of the AK470 Rifle were purchasable as stand-alone weapons in the Marketplace on the PC before the Parity Patch was released.

This weapon is based on the AK-47. 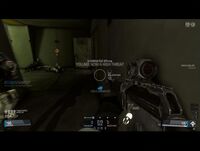