The Assault Rifle is a Primary Receiver available in Blacklight: Retribution and Blacklight: Tango Down.

Automatically unlocked for all new players, the Assault Rifle is the default Primary Weapon and is fully customizable with a wide array of tactical accessories from the in-game Customization Menu.

The Assault Rifle is a versatile fully automatic weapon, best described as a "jack-of-all-trades", and is effective at most ranges. This weapon is a great starting firearm for new players, thanks to its forgiving recoil and decent damage output. At close to middle range engagements, there are only a few other weapons that can be employed more effectively than the Assault Rifle. More seasoned veterans may choose to modify their rifles with Stocks, Scopes, Barrels, Muzzles and different Magazines to better suit their playstyle.

A competitive weapon in almost any scenario, the Assault Rifle is most effective when used with conscious trigger control. When at long range fire in short bursts to mitigate the recoil that can throw a player's aim off. Fully automatic fire is very effective in engagements at close to medium ranges, but remember to keep track of your Ammunition count, as holding down the trigger for extended lengths will burn through your starting supply quickly. Additionally, don't forget that firing from the hip can also be employed. While less accurate, the vital milliseconds saved by not aiming down sights can be a lifesaver in unexpected close range encounters.

Keep in mind, however, that despite its versatility, the Assault Rifle can and often will be outmatched by its more specialized brethren under specific conditions. Up close, both the Submachine Gun, M4X Rifle, and Tactical SMG may best the Assault Rifle due to their superior rates of fire. At a distance the Tactical Assault Rifle and the Heavy Assault Rifle will out damage it.

As with any weapon, play strategically, use cover and firing positions to your advantage, and if at all possible, do not give the enemy a fair fight.

These premade versions of the Assault Rifle were purchasable as stand-alone weapons in the Marketplace on the PC before the Parity Patch was released. 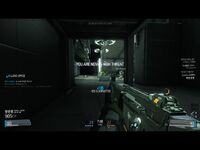 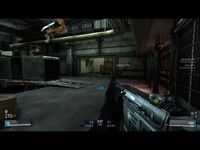 Assault Rifle in-game
Add a photo to this gallery

Retrieved from "https://blacklight.fandom.com/wiki/Assault_Rifle?oldid=21141"
Community content is available under CC-BY-SA unless otherwise noted.