The Barricade Mk.2 is a Tactical Gear available in Blacklight: Retribution.

The Barricade Mk.2 is a light weight riot shield that allows for quick movement with good visibility while protecting the user from most frontal damage.

This Tactical Gear is the Melee based successor of the Barricade Mk.1 and deals 125 damage per hit with a range of 2.0m, resulting in a consistent two hit kill regardless of an Agent's total health. The damage dealt cannot be increased however it may be mitigated with the use of the Melee Protection Gear for 31.25 (Rounded to 31) for a total of 94 damage per swing to the wearer.

It's effective against other agents that are using melee and some what effective at preventing damage from bullets, however as with its predecessor it will not protect against Area of Effect weapons such as Toxic Grenade Mk.1 or the FT18 Flamethrower.

The Barricade Mk.2 is also useful when facing players using a T56 Trident, or an AT-D4 Deployable Turret. Turrets target the player's center of mass, so long as the shield is pointed directly at the turret the user is able to approach without taking damage. When facing an Agent with the T56 Trident, be aware that the shield doesn't provide complete coverage as the user's feet are exposed.

Since most players in the game will be shooting at you try to keep the Barricade Mk.2 point directly at your target and sidestep often. Advancing

Tactical gear. Hold to shield yourself from the front 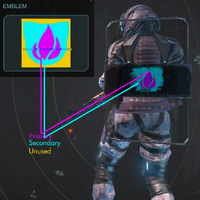 Emblem styling on the Barricade MK.2
Add a photo to this gallery

Retrieved from "https://blacklight.fandom.com/wiki/Barricade_Mk.2?oldid=18649"
Community content is available under CC-BY-SA unless otherwise noted.