The Bolt-Action Rifle (BAR) is a Primary Receiver in Blacklight: Retribution. Its counterpart in Blacklight Tango Down is the Sniper Rifle.

The Bolt-Action Rifle is a customizable long-range weapon and excels in large maps or in maps where both teams will remain relatively stationary, e.g. Safehold. This rifle is best employed across long open spaces.

The Bolt-Action Rifle is one of three Primary Receivers whose ammunition is cycled after each shot, the other two being the Anti-Materiel Rifle and the Compound Bow. This results in an extremely low fire rate compared to other in-game receivers. However, such a slow firerate is made up for by the rifle's high damage per shot, starting out at 175 damage by default.

While not enough to guarantee a kill against an enemy player in default Armor, headshots will still kill in one hit. Further customization can be used to increase the weapon's damage to 195, at which point the damage bonus is capped and cannot be further increased by any means besides using Incendiary Ammo.

Whenever possible, avoid close quarter encounters. While a powerful weapon at range, the Bolt-Action Rifle suffers in short distances. In general, avoid small maps like HeloDeck, and equip an able secondary receiver. For example, the Revolver, with its high damage per bullet can be used to to finish off wounded foes. Alternatively, a Machine Pistol, with its high rate of fire and mobility can help win close-quarter fights. The Shotgun is also an effective weapon in close-quarter fights.

Remember to switch to your secondary when hacking nodes, so that you may better defend yourself in case hostiles decide to show up.

When sniping with the Bolt-Action Rifle, plan ahead of time using your HRV and pick your targets wisely. Prioritize lone or injured enemies over entire squads. If playing on a team, remember to take up firing positions just behind the front line to assist your teammates and don't forget to move up when your squad pushes through.

Like the Light Machine Gun, the Bolt-Action Rifle has a lengthy reload time. With a 5-round magazine, remember to find cover and reload, both during and after firefights. Although camping in a single area may be tempting, you may find yourself being hunted down by enemies eager for vengeance. Stay on the move and change positions according to the flow of the match.

If caught in an unfavorable situation and a hostile has you in his sights at close range, resist the urge to quick-scope or hip fire. Trying to use a Bolt-Action Rifle at close range requires a great deal of skill and sometimes even luck. Although the Bolt-Action Rifle may be customized to better suit close-quarters and strafe-sniping by reducing move spread to a minimum at the penalty of decreased damage and fire rate, you will be more successful switching to your secondary and firing several shots.

An effective method of using a Bolt-Action rifle in closer quarters is to set the crosshair to static. This can be done by from the Settings menu. The Static Crosshair option is normally disabled by default. When this setting is enabled, the crosshair will remain closed and will not bloom when moving or firing. Quickly scope in and fire once the crosshair is aligned to your target.

These premade versions of the Bolt-Action Rifle were purchasable as stand-alone weapons in the Marketplace on the PC before the Parity Patch was released. 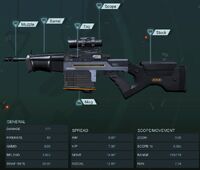 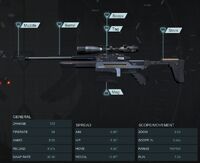 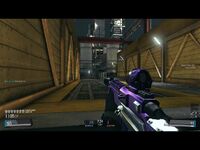 {{PAGENAME}} original description
Add a photo to this gallery

Retrieved from "https://blacklight.fandom.com/wiki/Bolt-Action_Rifle?oldid=21556"
Community content is available under CC-BY-SA unless otherwise noted.