The Burstfire Rifle is a Primary Receiver available in Blacklight: Retribution.

The weapon has a long reload time and relatively high recoil, but is very accurate, has long range, and delivers high damage with a high fire rate. For that, the burstfire rifle almost always kills anyone with just 2 bursts, if all 3 shots from each burst hit their target.

In exchange, however, the weapon decreases run speed slightly and has a sluggish reload time that is at its worst when reloading after emptying the entire magazine. Try to reload the gun before your ammo count hits zero to avoid a longer reload time or attach a fast reload mag.

The Burstfire Rifle's recoil effect on aiming varies with range. In close quarters, the recoil almost has no effect. But in long ranges, with an automatic weapon players are able to fire off single shots at distant targets with a relative degree of accuracy. However, when using the Burstfire Rifle's nature in a long range firefight, especially against enemy players in cover, you may have difficulty landing all three shots as the recoil from your gun kicks your crosshairs slightly upwards, causing 1 or 2 bullets to miss. Consider attaching accessories that will help remedy the weapon's recoil such as a Heavy Stock. However, the recoil may be helpful at medium ranges. For example, if you're aiming down sights at someone's chest and fire a burst, the first round will hit the chest, the second will hit the neck due the the recoil kicking your gun upwards, and the last one will hit the head, scoring a headshot. This may also happen at close quarters at a few occasions.

Additionally, when hip firing the Burstfire Rifle's behavior will start off with an initially tighter hip fire spread, the Reticule Bloom will quickly widen up to a point beyond the maximum of the Assault Rifle. If you are forced to hip fire with the Burstfire Rifle, remember to pause between bursts in order to let your reticule settle.

The burstfire nature of this weapon can make it hard to aim with. If you just started using this gun, you need to practice hipfiring the gun, know when to hipfire and when to aim down sights. Practicimg your aim with it regularly is essential, as this weapon heavily relies on your ability to aim well, due to its tight spread and burstfire nature. An alternative is building your weapon for high damage, high spread, and an extended mag. Doing so will make the burstfire rifle more akin to a lightmachine gun.

Due to its unique construction where the magazine is integrated in the Stock, the Burstfire Rifle has a set of its own Stocks that cannot be used with other weapons, except the Bullpup Full Auto. Other components, such as Scopes, Muzzles, and Barrels, can be used without restriction.

These premade versions of the Burstfire Rifle were purchasable as stand-alone weapons in the Marketplace on the PC before the Parity Patch was released.

Burstfire Rifle, modified with a Scope, Muzzle, barrel, and Camouflage.
Add a photo to this gallery 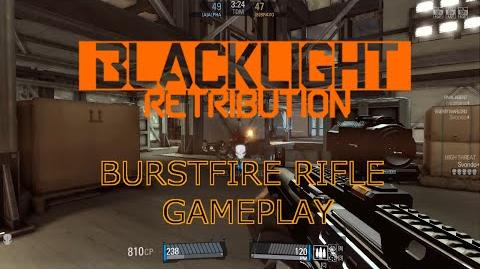 Retrieved from "https://blacklight.fandom.com/wiki/Burstfire_Rifle?oldid=21517"
Community content is available under CC-BY-SA unless otherwise noted.