The Combat Rifle is a Primary Receiver available in Blacklight: Retribution.

Like the Bolt-Action Rifle, it boasts high accuracy and damage with each shot. However, the Combat Rifle does have a much lower degree of recoil and higher ammo count, at the expense of reduced damage and hip fire spread. Due to these factors, the Combat Rifle is quite effective out to medium ranges, or even farther if using high zoom scopes.

Unlike the Bolt-Action, the Combat Rifle is capable of semi-automatic fire. It is highly recommended that players learn how to control their rate of fire when facing hostiles at varying ranges; single shots for distant enemies, and rapid, controlled bursts for closer foes. Take up a designated marksman's role as often as possible, and act as long-range support for your more versatile, Assault Rifle using teammates. When used properly, you may find yourself with many assists and headshots.

Although it is a deadly weapon in its own right, it is disadvantageous to use in close quarters engagements, unless the player can get several lucky shots off. Keep enemies at a distance when possible, and be prepared to switch to your secondary receiver just in case.

These premade versions of the Combat Rifle were purchasable as stand-alone weapons in the Marketplace on the PC before the Parity Patch was released. 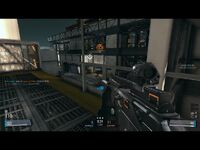