Heavy Metal is a map in Blacklight: Retribution set in a factory producing military hardware. It features close-quarters combat inside the facility, and longer-range combat in the roadways outside.

There are many gates located around the map that can be opened or closed by a small number-matching minigame. Opening or closing one of these gates can significantly change the flow of combat in certain areas of the map. 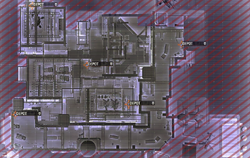 Retrieved from "https://blacklight.fandom.com/wiki/Heavy_Metal?oldid=13439"
Community content is available under CC-BY-SA unless otherwise noted.