Search and Destroy (SND) is a team-based game mode in Blacklight: Retribution that was released with patch 1.100 in late February 2013. It has some similarities to Capture the Flag.

The objective of Search and Destroy is to carry an explosive device to the enemy's base and detonate it there to win the round. There is a total of 10 rounds, so the first team to win 6 rounds wins the match.

Both teams start out in 2 separate spawning points, one of them will also constitute the target area for the attacking team. There is only 1 bomb, so teams are either in the attacking role or defending. One player will carry the bomb and attempt to deliver it to the target area. Unlike CTF, the position of the bomb even when carried is NOT visible throughout the map because the bomb includes a built-in HRV Cloak with unlimited energy.

If the carrier is killed, the bomb is dropped, though it will not be returned to the original point when an enemy walks over it. It will remain where it was dropped until a player from the team that owns the bomb picks it up again. Players who are killed cannot respawn until the end of the round, though they may be revived.

There are 10 rounds in total. A round is won when the bomb was detonated in the target area, or when all members of the opposite team are killed. A round may also end automatically after 3 minutes, when none of the objectives have been achieved. In this case, the round goes to the team with most kills. When the bomb is delivered (approach one of the designated stations while carrying it, then press and hold 'e'), the opposite team still has some time to defuse it before it will detonate. 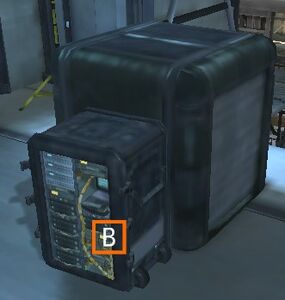 bomb carried by a player

bomb shortly before detonation
Add a photo to this gallery
Retrieved from "https://blacklight.fandom.com/wiki/Search_and_Destroy?oldid=13361"
Community content is available under CC-BY-SA unless otherwise noted.