The Silver Crowbar is a melee Gear awarded to players after Blacklight: Retribution's first anniversery.

2.0m
The Silver Crowbar is a permanent Melee Gear that was given to players who logged in after the Onslaught patch, also as a reward for Blacklight: Retribution's first anniversary.

The Silver Crowbar is identical to the Black Mesa Crowbar, except that it is silver instead of red. Additionally, the Silver Crowbar deals the same amount of damage as the Combat Knife Mk.1.

A silvered weapon for bashing nearby opponents.

This information is no longer accurate and should only be used for historical purposes. This item is intended as a permanent gift. However, when first received it will come as a 1 day item. Once it has expired, it is possible to re-activate it, this time there will be a permanent price of 0 GP. 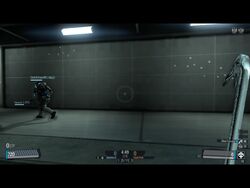 The Silver Crowbar In-Game
Add a photo to this gallery

Retrieved from "https://blacklight.fandom.com/wiki/Silver_Crowbar?oldid=21589"
Community content is available under CC-BY-SA unless otherwise noted.