The Order is one of the Factions available in Blacklight: Tango Down and Blacklight: Retribution. They are a highly organized rebel group consisting of Ex-US Special Forces and local militia. These mysterious, experienced rogue soldiers use their top-level training, skills, and learned tactics to build elaborate fortifications which shield the construction of an advanced infrastructure that supplements the further development of their own impressive collection of military hardware and technology. They have some of the best equipment and technology that money can buy. Their advanced knowledge of Balik City also helps supplement their considerable usage of deadly high-tech weaponry.

The Order's publicized purpose is to protect the civilian population of Balik, although their efforts are not solely limited to that area. The Order takes pride and honor in being the first respondent into areas infected with disease and SIVs (Sentient Insanity Virus). Their elite group of Special Forces operatives specializes in population- and urban-sector control measures. The Order’s end goal is to halt the spread of and find an antidote for the virus that is devastating the world.

The Order originally took up arms against the city of Balik's government that was laid low by the initial outbreak of the virus; The government was seen as an impotent force that was simply unable to tackle the problem.

With the city of Balik left in ruins, The Order stepped in to rebuild by eliminating the virus… by any means necessary. As the population of Balik was essentially deserted by their leaders, the city's government and social support system evaporated overnight. But The Order filled that void, restoring order and keeping the population safe. Their propaganda states they are not seeking power, territory or wealth, but instead looking to right what they consider to be a wrong.

The Order’s arrival came as a surprise to all international intelligence bureaus, and there are still conflicting theories on where and how they first started. Though one thing all intelligence bureaus have in agreed upon is that they know that The Order is run by a single leader, are represented by their serpent logo, ignore local law enforcement/military to achieve their goals and have significant financial support, enabling them to purchase cutting-edge technology and deploy it onto the battlefield.

As an organization, The Order only recruits their operatives through invitations, selecting the highest calibre soldiers from both Special Operations and Private Military Organizations. The Order also hires local militia to gain first-hand knowledge on the areas of their operations, and to better win the hearts and minds of the local communities. This also provides them a platform from which they can evangelize their propaganda.

The Order’s technology is hacked, top-tier military grade equipment, modified to fit their operations and tactics. They can easily use equipment from fallen comrades or enemies to upgrade and modify their own selection of gear. This sense of modularity is also seen in the styles of their bases and fortifications, as they reportedly use street items in tandem with their own pre-made military equipment, resulting in a fluid system of adaptability.

The Order’s measures and tactics are reportedly clean, tough and on point. However, there have been rumors of civilian killings and mass executions. These rumors are currently unsubstantiated, and thus are labeled by The Order as propaganda from those who oppose them.

The Order is represented by a Red Snake coiled in a circle, poised to strike at any moment. 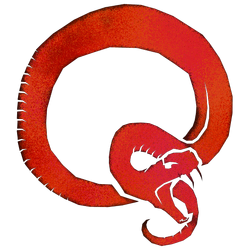 Members of The Order appear in the Onslaught mode of Blacklight: Retribution, apparently aiding the zombie-like SIVs. They are identified by the orange neon lights on their Armor, which is the same color used for the opposing team in other modes.

The Order members first appear during the third wave of enemies, carrying either a modified Assault Rifle or modified Shotgun. Later on, they will begin carrying the FT18 Flamethrower and the RL5 Armor Stinger along with wearing heavier types of Armor. Additionally some Order members will appear carrying only the Barricade Mk.1 Tactical Gear as well, actively using it as a melee weapon and as an effective means to shield themselves from bullets while getting into melee range, where they can overwhelm an unprepared Agent.

Aside from The Order's appearance in Blacklight: Retribution's Onslaught mode, their presence is also noted in some forms of Armor, the clearest of which is the Dataluxe Breach-X7 Helmet, where The Order's logo is printed on it's side. But whether or not it means that an Agent wearing said Helmet - or any Order-like Armor for that matter - is actually a true member of The Order, however, is ultimately up to the player's interpretation.

Retrieved from "https://blacklight.fandom.com/wiki/The_Order?oldid=19676"
Community content is available under CC-BY-SA unless otherwise noted.