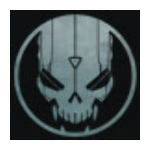 I came across this wiki and decided to add some stuff about Blacklight: Retribution, as so far, it seems mostly about the first part of the game. I have been participating in the Open Beta since the beginning, so I should be able to make some contributions here.

I have set up the German Blacklight wiki and linked it to this one, also used the same style, hope no-one minds ;)

Let me know if you feel I could make a contribution in some specific field of the game, or if you see a problem with any of my pages and/or edits.

In my first Loadout, I have my Assault Rifle. I used to play with the first build, the Standard Solid Stallion, but recently I upgraded the magazine and it became an Express Solid Jackal.

This is by far my favorite weapon. What can I say, I love the sound of it firing!

It goes Fop-Fop-Fop-Fop ... an then you may have to [PRESS SPACE] if you stood on the wrong end of it ;)

It is a LMG Receiver modded with a Vulcan r36 Spectrum Muzzle, Titan AR4-NightStalker Barrel, Taurex ACP Mod 0 Stock, a Silverwood CONS ELO-Tech Scope for quick aiming and an ArmCom H35-QUICK to reload twice as fast. I used Bronze Metallic to give it a 'Golden Gun' look ('Gold Metallic' looked too much like neon yellow to me). It comes with Standard Ammunition, though occasionally I rent an incendiary mag for 1 day to do some damage over time. Most of the components aim at improving Recoil, Spread, Range, and slightly Damage, while reducing Run speed. I usually have a weapon tag that further improves Recoil. Deployment: HeloDeck

present in all Loadouts, though currently rotating with Breach Loaded Pistol and Machine Pistol

Other stuff I bought or earned permanentlyEdit

Retrieved from "https://blacklight.fandom.com/wiki/User:Fridi_San?oldid=10843"
Community content is available under CC-BY-SA unless otherwise noted.